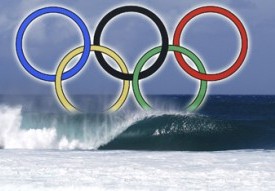 Surfing has been officially confirmed as an Olympic sport today, August 3, at a meeting of the international Olympic Committee. The 2020 Olympics will be held in Japan, in real waves, far from the dirty waters or Rio – hopefully at one of their perfect rivermouth breaks during the peak of a Typhoon swell.
[read more]

Next question. WHERE in Japan will the games be held??